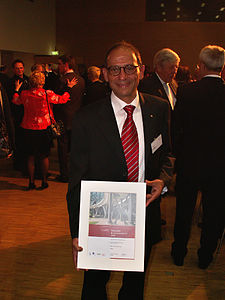 Who is Hani Azer?

Hani Azer is an Egyptian Engineer. He was born in Tanta, Egypt and moved to Cairo for High School and University. In 1973, after earning BSc degree from the Faculty of Engineering, Ain Shams University;Egypt, he moved to Germany to study Post-Graduatation in Civil Engineering in Bochum.

Hani Azer headed the construction of the tunnel beneath Berlin's Tiergarten in 1994. Subsequently, he became the Chief Engineer of Europe's largest train station in Berlin, Germany, also known as the Berlin Hauptbahnhof. The station is a modernistic structure with a roof built almost entirely of glass blocks. The project cost $700 million. Berliners voting Azer 13th among the top 50 Berliners of the year in 2006.

Azer was honored by the German Chancellor Angela Merkel on 26 May 2006 at the inauguration of the Berlin Hauptbahnhof. Azer was also later honored by Egyptian president Hosni Mubarak . On 1 October 2006, Azer received one of Berlin's most respected distinctions: the Verdienstorden des Landes Berlin, for outstanding service to the state.

Discuss this Hani Azer biography with the community: