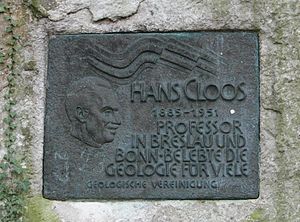 Who was Hans Cloos?

Born in Magdeburg, Germany, Hans Cloos earned his doctorate at Freiburg in 1910, then worked in Indonesia and Namibia up until the start of First World War. During the war his geological skills were put to use along the western front.

Following the war, he began a study of plutons and their interior structure. In 1919 he became professor of geology at the University of Breslau. His younger brother, Ernst Cloos, who was born in 1898, would come to study geology at Breslau under his brother and later became a prominent geologist as well.

In 1926 Cloos left Breslau to become professor of geology at the University of Bonn. He made additional geological trips to explore the Scandinavian region, England, and North America.

Professor Hans Cloos made pioneering studies of rock deformation, including granite tectonics. He employed scale models to study the physical mechanics of faulting, and examined how continents developed their structure. He was also noted for his artistic abilities, including music and draftsmanship.

Discuss this Hans Cloos biography with the community: