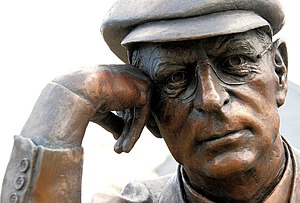 Who was Harry Ferguson?

Henry George "Harry" Ferguson was an Irish engineer and inventor who is noted for his role in the development of the modern agricultural tractor, for becoming the first Irishman to build and fly his own aeroplane, and for developing the first four-wheel drive Formula One car, the Ferguson P99. Today his name lives on in the name of the Massey Ferguson company.

Discuss this Harry Ferguson biography with the community: