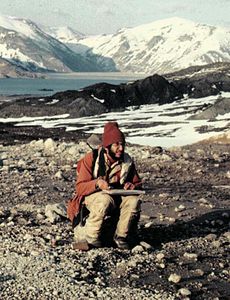 Who was Harry Glicken?

Harry Glicken was an American volcanologist. He was killed on June 3, 1991 by a pyroclastic flow on Mount Unzen in Japan in an eruption that killed 42 other people, including volcanologists Katia and Maurice Krafft. Glicken notably worked at Mount St. Helens in the United States before and after its famous 1980 eruption, and he felt responsible for the death of fellow volcanologist David A. Johnston, who switched with Glicken so that the latter could attend an interview.

Glicken was a highly dedicated scientist considered enthusiastic and eccentric by his associates, who praised his love for volcanoes and his commitment to accomplishing something major in his field. He was an expert in the speciality of volcanic debris avalanches and wrote several major publications on the topic, including a detailed study of St. Helens titled "Rockslide-debris Avalanche of May 18, 1980, Mount St. Helens Volcano, Washington" that initiated widespread interest in volcanic landslides. That 1996 report has been acknowledged by many other publications on debris avalanches.

Discuss this Harry Glicken biography with the community: