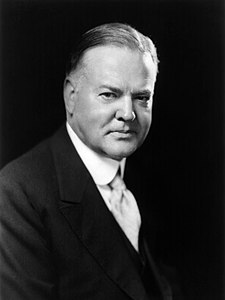 Who was Herbert Hoover?

Herbert Clark Hoover was the 31st President of the United States. Hoover, born to a Quaker family, was a professional mining engineer. He achieved American and international prominence in humanitarian relief efforts in war-torn Belgium and served as head of the U.S. Food Administration before and during World War I. As the United States Secretary of Commerce in the 1920s under Presidents Warren G. Harding and Calvin Coolidge, he promoted partnerships between government and business under the rubric "economic modernization". In the presidential election of 1928, Hoover easily won the Republican nomination, despite having no elected-office experience. Hoover is the most recent cabinet secretary to be elected President of the United States, as well as one of only two Presidents elected without electoral experience or high military rank. America was at the height of an economic bubble at the time, facilitating a landslide victory for Hoover over Democrat Al Smith.

Hoover, a globally experienced engineer, believed strongly in the Efficiency Movement, which held that the government and the economy were riddled with inefficiency and waste, and could be improved by experts who could identify the problems and solve them. He also believed in the importance of volunteerism and of the role of individuals in society and the economy. Hoover, who had made a small fortune in mining, was the first of two Presidents to redistribute their salary. When the Wall Street Crash of 1929 struck less than eight months after he took office, Hoover tried to combat the ensuing Great Depression with government enforced efforts, public works projects such as the Hoover Dam, tariffs such as the Smoot-Hawley Tariff, an increase in the top tax bracket from 25% to 63%, and increases in corporate taxes. These initiatives did not produce economic recovery during his term, but served as the groundwork for various policies incorporated in Franklin D. Roosevelt's New Deal. After 1933, he became a spokesman in opposition to the domestic and foreign policies of the New Deal. In 1947, President Harry S. Truman brought him back to help make the federal bureaucracy more efficient through the Hoover Commission. The consensus among historians is that Hoover's defeat in the 1932 election was caused primarily by his failure to end the downward economic spiral, although his support for strong enforcement of prohibition was also a significant factor. Hoover is generally ranked lower than average among U.S. Presidents.

Discuss this Herbert Hoover biography with the community: