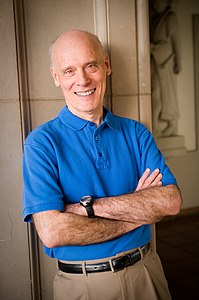 Who is Hugh Ross?

Ross has a Ph.D. in astrophysics from the University of Toronto and an undergraduate degree in physics from the University of British Columbia. He is known for establishing his own ministry called Reasons to Believe that promotes progressive and day-age forms of Old Earth Creationism. Ross advocates an old age of the earth and an old age of the universe, though he rejects evolution and abiogenesis as explanations for the history and origin of life.

Discuss this Hugh Ross biography with the community: