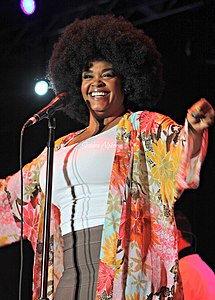 Who is Jill Scott?

Jill Scott is a Grammy-winning American singer-songwriter, actress and poet. Since 1999, Scott has made a reputation for being a classic, thought provoking artist gained by her 2000 multi-platinum selling debut, Who Is Jill Scott? Words and Sounds Vol. 1. Their followups Beautifully Human: Words and Sounds Vol. 2 released in 2004, and The Real Thing: Words and Sounds Vol. 3 released in 2007 both achieved gold status. She made her cinematic debut in the films Hounddog and Tyler Perry's Why Did I Get Married? in 2007. She also appeared as the lead role in the BBC/HBO series The No. 1 Ladies' Detective Agency.

Discuss this Jill Scott biography with the community: