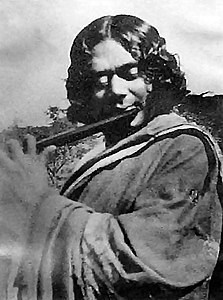 Who was Kazi Nazrul Islam?

Kazi Nazrul Islam, known popularly as Nazrul, was a Bengali poet, musician and revolutionary who pioneered poetic works espousing intense spiritual rebellion against fascism and oppression. His poetry and nationalist activism earned him the popular title of "বিদ্রোহী কবি" Bidrohī Kobi (Rebel Poet). Accomplishing a large body of acclaimed works through his life, Nazrul is officially recognised as the national poet of Bangladesh and highly commemorated in India. He also composed the Bangladesh military march "The Song of Youth", now known as "Chal Chal Chal".

Born into a Bengali Muslim Quazi (Kazi) family, Nazrul received religious education and worked as a muezzin at a local mosque. He learned of poetry, drama, and literature while working with theatrical groups. After serving in the British Indian Army, Nazrul established himself as a journalist in Calcutta. He assailed the British Raj in India and preached revolution through his poetic works, such as "Bidrohi" ("The Rebel") and "Bhangar Gaan" ("The Song of Destruction"), as well as his publication "Dhumketu" ("The Comet"). His impassioned activism in the Indian independence movement often led to his imprisonment by British authorities. While in prison, Nazrul wrote the "Rajbandir Jabanbandi" "রাজবন্দীর জবানবন্দী" ("Deposition of a Political Prisoner"). Exploring the life and conditions of the downtrodden masses of India, Nazrul worked for their emancipation.

Discuss this Kazi Nazrul Islam biography with the community: