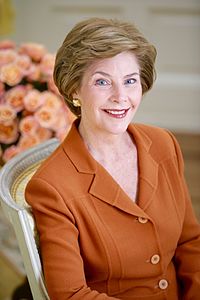 Who is Laura Bush?

Laura Lane Welch Bush is the wife of the 43rd President of the United States, George W. Bush. She was the First Lady from 2001 to 2009. She graduated from Southern Methodist University in 1968 with a bachelor's degree in education and soon took a job as a second grade teacher. After attaining her master's degree in Library Science at the University of Texas at Austin, she was employed as a librarian. She met George Walker Bush in 1977, and they were married later that year. The couple had twin daughters in 1981.

Bush's political involvement began during her marriage. She campaigned with her husband during his unsuccessful 1978 run for the United States Congress and later his successful Texas gubernatorial campaign. As First Lady of Texas, Bush implemented many initiatives focused on health, education, and literacy. In 1999, she aided her husband in campaigning for the presidency in a number of ways, most notably delivering a keynote address at the 2000 Republican National Convention, which gained her national attention. She became first lady after her husband defeated Democrat Al Gore in the 2000 U.S. Presidential Election.

Polled by Gallup as one of the most popular First Ladies, Laura Bush was involved in both national and global concerns during her tenure. She continued to advance her trademark interests of education and literacy by establishing the semi-annual National Book Festival in 2001 and encouraged education on a worldwide scale. She also advanced women's causes through The Heart Truth and Susan G. Komen for the Cure. She represented the United States during her foreign trips, which tended to focus on HIV/AIDS and malaria awareness. In May 2010, Bush released her memoir, Spoken from the Heart, in conjunction with a national tour. Bush is on the Board of Selectors of Jefferson Awards for Public Service.

Discuss this Laura Bush biography with the community: