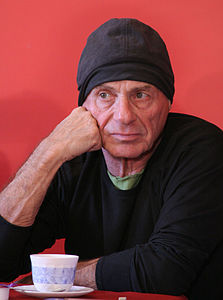 Who is Lee Breuer?

Breuer's most recent work La Divina Caricatura: Part I The Shaggy Dog was co-produced by Mabou Mines, piece by piece productions, Dovetail Productions and co-presented by St. Ann's Warehouse and La MaMa etc. La Divina is a Bunraku Puppet Pop-Opera which Breuer both wrote and directed. In a review of the December 2013 premiere, the New York Times called "La Divina"- "...strange, singular, perfectly self-contained and so wondrous that it may leave you in a daze."

His previous Mabou Mines production include, "Red Beads" created in collaboration with puppeteer Basil Twist and composer Ushio Torikai. Of the September 2005 New York City premiere, the New York Times said: "… theater as sorcery; it is a crossroads where artistic traditions meet to invent a marvelous common language. It is a fairy tale, a puppet play and a chamber opera… amazing work."'Mabou Mines Dollhouse, a deconstruction of the Ibsen classic, won 2004 Obie Awards for Best Director and Best Performance. The production toured nationally and internationally to more than 30 cities on 5 continents. Breuer directed high definition video adaptation of stage production for Arte television France, which was aired throughout Europe.

Discuss this Lee Breuer biography with the community: