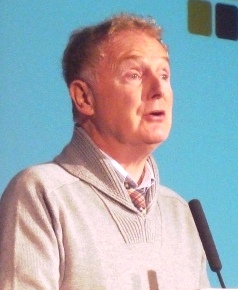 Who was Malcolm McClaren?

Born into a dysfunctional family, he attended a number of British art colleges and adopted the stance of the social rebel in the style of French revolutionaries, the Situationists.

With a keen eye for trends, McLaren realised in the 1970s that a new youth style was needed, and largely initiated the punk movement, to which he supplied fashions from the Chelsea boutique 'SEX', operated with his girlfriend Vivienne Westwood. After a spell advising the New York Dolls in the US, McLaren managed the Sex Pistols, to whom he recruited the charismatic frontman Johnny Rotten. The issue of a controversial record, "God Save the Queen", satirising the Queen's Jubilee was typical of McLaren's shock-tactics, and he gained publicity by being arrested after a promotional boat trip outside the Houses of Parliament.

Discuss this Malcolm McClaren biography with the community: