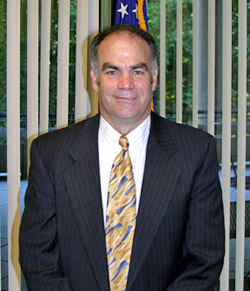 Who is Mark Myers?

Mark D. Myers is an American geologist who served as the fourteenth Director of the U.S. Geological Survey. He was nominated by President George W. Bush on May 3, 2006, confirmed by the U.S. Senate, and sworn in September 26, 2006. Dr. Myers replaced prior director Charles G. Groat, who had resigned effective June 17, 2005.

Anticipating the inauguration of Barack Obama as U.S. president, Myers resigned as USGS director on January 8, 2009, "as is customary during a change in Administrations."

On January 21, 2009, Alaska Governor Sarah Palin appointed Myers as coordinator for the Alaska Gasline Inducement Act, responsible to lead efforts to expedite state review and permitting for a proposed natural gas pipeline intended to transport natural gas from Alaska's North Slope to markets in the contiguous 48 states of the U.S.

On September 3, 2010, Chancellor Rogers of the University of Alaska Fairbanks announced that Myers had accepted the position of UAF Vice Chancellor for research, slated to begin on January 24, 2011.

Discuss this Mark Myers biography with the community: