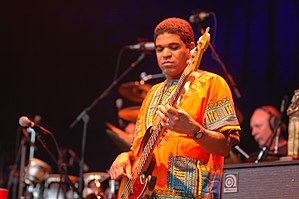 Who is Oteil Burbridge?

Oteil Burbridge is an American Grammy Award-winning multi-instrumentalist, specializing on the bass guitar, trained in playing jazz and classical music from an early age. He has achieved fame primarily on bass guitar during the current resurgence of the Allman Brothers Band from 1997 through the present day. He was also a founding member of the band the Aquarium Rescue Unit, and has worked with other musicians who include Bruce Hampton, Trey Anastasio, Page McConnell, Bill Kreutzmann and The Derek Trucks Band, with whom his brother Kofi Burbridge is the keyboardist and flautist.

Burbridge is most notably recognized for his ability to incorporate scat-singing into his improvised bass solos. His bass style is influenced by Jaco Pastorius, especially his use of bass chords which are used in his bass improvisation. Oteil endorses Fodera, Modulus, Sukop and Dunlop.

Discuss this Oteil Burbridge biography with the community: