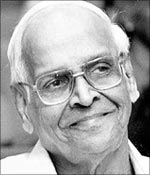 Who was P. Bhaskaran?

Pulloottupadathu Bhaskara Menon, better known as P. Bhaskaran, was a famous Malayalam poet and lyricist of Malayalam film songs. He penned more than 3000 songs for about 250 films. He also directed 44 Malayalam feature films and 3 documentaries, produced 6 feature films and acted in several movies. For his overall contributions to Malayalam cinema, he was awarded J.C.Daniel Lifetime Achievement Award by the Government of Kerala.

He was also a journalist and an All India Radio employee before becoming active in the film industry. He was well known for simple but beautiful use of the language in his songs and poems.

Discuss this P. Bhaskaran biography with the community: