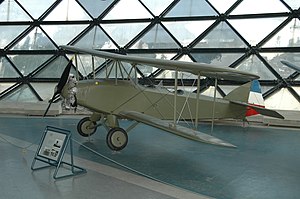 Rudolf Fizir was an airplane constructor. He designed at least 18 original planes, some conversions of landplanes to seaplanes - and a parachute.

Fizir was born in Ludbreg, a small town on the river Drava, in the north of Croatia. In 1914, whilst still a senior student, he was offered his first job in Schwerin, where he worked in the construction of fighter aircraft for the German Fliegerkorps in the new Fokker-Flugzeugbau factory. From there he was sent to Budapest, in order to find and organize a Fokker subsidiary.

Between 1918 and 1920, Fizir was employed in the automobile industry, where he gathered experience with internal combustion engines. In 1920 he returned to Ludbreg, and then moved to Petrovaradin. There he started to build his aircraft designs in his yard, at his own expense.

With a biplane, which Fizir built in 1925, he won the first prize in the 1927 Petite Entente contest. Other aircraft he produced were named after the engines used, such as the Fizir-Mercedes, Fizir-Wright, Fizir-Titan, Fizir-Kastor, Fizir-Gypsi, and the half-metallic Fizir-Jupiter. His successful designs, almost all wooden, were economic to produce, reflecting the low economic power of the pre-World War II Kingdom of Yugoslavia, wartime Croatia and post-World War II Yugoslavia, and were highly regarded in Germany and France throughout the 1930s, 40s and 50s. He had a strong affiliation for trainers and seaplanes, having a vision of connecting the Adriatic islands with a regular seaplane service.

Discuss this Rudolf Fizir biography with the community: