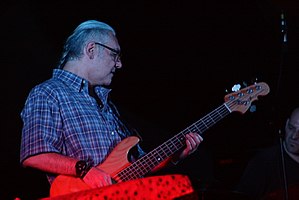 Who is Sabo Romo?

Salvador Sabo Romo is a bass and guitar player, composer and producer. He was born in Mexico City.

Interested in music since childhood, he played drums, wrote songs and sang on his first band. At eighteen he discovered the bass, and formed “Manhattan”, a light jazz band, and then “Ruido Blanco” with journalist and musician Oscar Sarquiz, who introduced Sabo to Guillermo Briseño, and Ricardo Ochoa starting the recording and production of many records and many tours in the mid-1980s.

Romo was a founding member of Caifanes in 1987, recording four albums with BMG and touring all the world with them: produced Aleks Syntek, Benny, Ely Guerra, Gandhi, Moenia, Tania Libertad, Jaguares … and has sold 10 million of copies. Sabo has been declared “The best latinamerican Bass Player”.

On February 19, 2010, Romo suffered a heart attack and recovered successfully.

Discuss this Sabo Romo biography with the community: