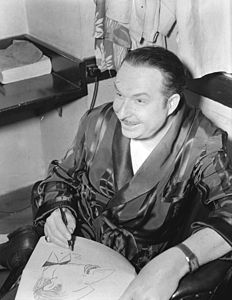 Who was Xavier Cugat?

Xavier Cugat was a Spanish-American bandleader who spent his formative years in Havana, Cuba. A trained violinist and arranger, he was a personality in the spread of Latin music in United States popular music. He was also a cartoonist. In New York, he was the leader of the resident orchestra at the Waldorf-Astoria before and after World War II.

The personal papers of Xavier Cugat are preserved in the Biblioteca de Catalunya.

Discuss this Xavier Cugat biography with the community: