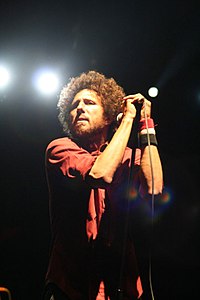 Who is Zack de la Rocha?

Zacarías Manuel "Zack" de la Rocha is an American musician, poet, rapper and activist best known as the vocalist and lyricist of Rage Against the Machine from 1991–2000, and since the band's reunion in 2007. He left Rage Against the Machine in October 2000, and embarked on a low-key solo career. With Mars Volta drummer Jon Theodore, de la Rocha co-founded One Day as a Lion in 2007. They released one album in 2008.

Discuss this Zack de la Rocha biography with the community: